One of my customers was using BIND to handle their public facing DNS. In a effort to remove technical debt, minimize their infrastructure footprint, and to make it easier for staff, I was tasked to look for a cloud alternative to BIND

Azure has a DNS hosting solution that has recently been slapped with a 100% SLA. Given this SLA and the fact that it’s dirt cheap, there’s no reason why you shouldn’t be using Azure DNS!

Now on to the task at hand, getting the zones imported into Azure DNS. Using Azure CLI, we can very easily import the zone files directly to Azure!

Once you kick that off, you should start seeing it importing each record: 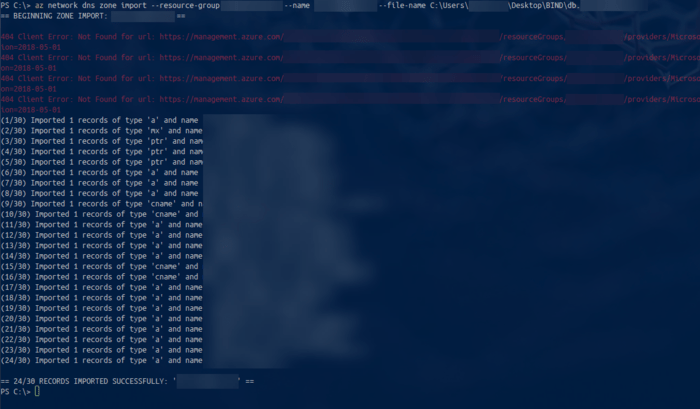 Shout out to Microsoft for making it straight forward. The only quirk I’ve ran across was on one of the zones I was importing, the last character on each record got cut off? For example, an A record of example.domain.com imported as example.domain.co

Scripts to Remove the Zoom Client

Given the increased amount of Zoom vulnerabilities, one of my clients wanted to remove any and all Zoom installations from their domain workstations. So, naturally, PowerShell to the rescue! <# .SYNOPSIS Downloads the CleanZoom.exe... Continue →